Unplug Your Wall Warts and Save the Planet? 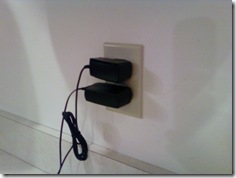 Let's try something unique. I’ll use actual data to see if we can save the planet by unplugging wall transformers.

Step one – Measure wall wart power utilization.
Remember that Volts x Amps = Watts, and Watts are what we care about. Your power company charges you for kilowatt-hours. (One thousand watts for one hour is a kWh). 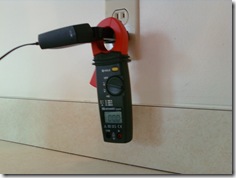 Start with one clamp-on AC ammeter, one line splitter with a 10x loop (the meter measures 10x actual current)and one wall wart (a standard Nokia charger for an N800).

And we have zero amps on the meter.

OK - That meter is made for measuring big things, so maybe I need a different meter.

Wall warts don't draw much current. They don't show up on the ammeters' scale even when amplified by a factor of 10.

Try again - this time with an in-line multimeter with a 300mA range. 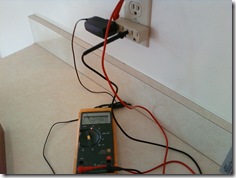 Children - don't try this at home - unless you are holding on to your kid brother and he is properly grounded to a water pipe.

That's better. It looks like we have a couple milliamps current draw.

Try a few more. The ones I have (Motorola, Samsung, Nokia) are all pretty close to the same. Lets use a high estimate of 5mA @ 120v, or about a half of a watt.

Similarity, checking various other parasitic transformers, like notebook computer power bricks, yields currents in the low milliamp ranges. When converted to watts, the power draw for each brick is somewhere between one-half and two watts.

To make sure the numbers are rational and that I didn't make a major error somewhere, I did the simplest check of all. I placed my hand on the power bricks. When they are plugged into the wall and nothing is plugged into them, they are not warm. (Warm = watts).

One more sanity check. Plugging three notebook power supplies and three phone power supplies into a power strip shows about 30mA @ 120v for all six bricks, which is under 4 watts, or less than a watt each. My measurement are rough (I don't have a proper milliamp meter), but for estimates for a blog that nobody actually reads, they should be close enough.

So lets pretend that I want to save the planet, and that unplugging power bricks is the way I'm going to do it. I'll need to periodically plug them in to charge whatever they are supposed to charge. Lets assume they'll be plugged in for 4 hours per day and unplugged 20 hours per day. If I have a half dozen power bricks, I'll save around 5 watts x 20 hours = 100 watt-hours per day, or the amount of electricity that one bright light bulb uses in one hour. That would add up to 35kWh (Kilowatt-hours) per year. Not bad, right?

Until you put it into perspective.

Perspective
Let's take the other end of the home appliance spectrum. The clothes dryer (clothes tumbler to those on the damp side of the pond). That one is a bit harder to measure. The easiest way is to open up the circuit breaker box and locate the wires that go to the dryer. 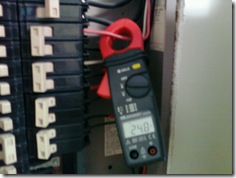 Hooking up to the fat red wire while the dryer is running shows a draw of about 24 amps @ 220 volts. I did a bit of poking around (Zzzztttt! Oucha!!.....Damn...!!!) and figured out that the dryer, when running on warm (verses hot or cold) uses about 20 amps for the heating element and about 4 amps for the motor. The motor runs continuously for about an hour per load. The heating element runs at about a 50% duty cycle for the hour that the dryer is running on medium heat.

Assume that we dry a handful of loads per week and that one load takes one hour. If the motor runs 4 hours/week and the heating element runs half the time, or two hours per week, we'll use about a dozen kWh per week, or about 600 kWh per year. That's about the same as 100 wall warts.

How about doing one less load of clothes in the dryer each week? You can still buy clothes lines at the hardware store - they are over in the corner by the rest of the End-of-Life merchandise, and each time that you don't use your clothes dryer, you'll save at least as much power as a wall wart will use for a whole year.

Lets do another quick check. Lets say that I have a small computer that I leave run 24 hours per day. Mine (an old SunBlade 150 that I use as a chat and file server) uses about 60 watts when powered up but not doing anything. That's about 1.4 kWh per day or about 500kWh per year, roughly the same as my clothes dryer example and roughly the same as 100 wall warts. Anyone with a gaming computer is probably using twice as much power. So how about swapping it out for a lower powered home server?

Notebooks, when idling with the screen off, seem to draw somewhere between 15 and 25 watts. (Or at least the three that I have here at home are in that range). That's about half of what a low end PC draws and about the same as 25 wall warts. So using a notebook as your home server will save you (and the planet) far more that a handful of wall warts. And better yet, the difference between a dimly lit notebook screen and a brightly lit one is about 5 watts. Yep - that's right, Dimming your screen saves more energy than unplugging a wall wart.

How about a quick and dirty way of figuring out what to turn off without spending a whole Sunday with ammeters and spreadsheets? It's not hard.

If it is warm, it is using power.

The warmer it is, the more power it is using. (Your laptop is warm when it is running and cold when it is shut off, right?). And if you can grab onto it without getting a hot hand, like you can do with a wall wart, (and like you can't do with an incandescent light bulb) it isn't using enough electricity to bother with.

So why do we care? Oh yeah - that global warming thing. Assuming that it's all about the CO2, we could throw a few more bits into the equation. Using the CO2 calculator at the National Energy Foundation in the UK and some random US Dept of Energy data, and converting wall warts to CO2 at a rate of 6kWh per wall wart per year and 1.5lbs of CO2 per kWh, it looks like you'll generate somewhere around 4kg of CO2 per year for each wall wart, +/- a kg or two, depending on how your electricity was generated.

Compare that to something interesting, like driving your car. According to the above NEF calculator and other sources, you'll use somewhere around a wal-wart-years worth of CO2 every few miles of driving. (NEF and Sightline show roughly 1kg of CO2 every two miles of driving). So on my vacation this summer I drove 6000 miles and probably used something like 3000kg of CO2. That's about 700 wall-wart-year equivalents (+/- a couple hundred wwy's). Can you see where the problem might be? (Hint - It's the long bright blue bar)
Obviously my numbers are nothing more than rough estimates. But they should be adequate to demonstrate that if you care about energy or CO2, wall warts are not the problem and unplugging them is not the solution.

Should you unplug your wall warts?


You can do way better than that!


Disclaimer: No wall warts were harmed in the making of this blog post. Total energy consumed during the making of the post: 5 - 23 watt CFL bulbs for 2 hours = 230 watt-hours; 5 - 25 watt incandescent bulbs for 1/2 hour = 62.5 watt-hours; one 18 watt notebook computer for 3 hours = 54 watt-hours; one 23 watt notebook for 3 hours = 69 watt-hours; Total of 415 watt-hours, or 28.8 wall-wart-days. Any relationship between numbers in this blog post and equivalent numbers in the real world is coincidental. See packaging for details.