Spent the weekend digging into Regulation E., particularly Section 205.11. That’s the part where you try to convince your regional bank that you really didn’t authorize those charges, that you were not ‘card present’ in New York, and you didn’t have homeless people in your house rummaging through your stuff, borrowing your debit card, jetting to the east coast, buying cosmetics and jetting back.

This isn’t unexpected. We’ve kept this debit card attached to a special checking account that we never have more than $400 in at any time, just for this reason. The theory is that transactions will start to fail before the damage gets too expensive. In practice, I’m not sure if the bank will honor the overdraft attempts or not. I’d be un-amused if they had some sort of ‘convenience’ feature that turned the fraud into overdrafts and then into 22% loans. That would be a bad day.

This particular card was only used at a small number of merchants, mostly local and regional grocery chains, so my guess is that either a local/regional merchant or their upstream provider has a leak. The bank had already pulled the card and reissued it a couple days before we saw the bogus transactions.

So now I’m in paranoid mode, or more likely I’m in more-paranoid-than-usual mode. The good news is that I can finally close the loop on what I’ve been saying for years, namely ‘I wouldn’t be paranoid if everyone weren’t out to get me!’. 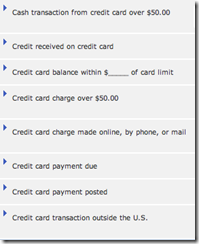 Unfortunately the regional bank doesn’t have anything that helps mitigate something like this other than checking your online statement every day and sending a postal letter to ‘Regulation E Department’ when bad things show up. Bank of America, on the other hand, lets me do a few interesting things. First they let me use my cell phone as a two-factor SMS based proxy when logging in to their web portal with what they call SafePass® (details here).

Second, they allow me to generate single-merchant, limited value card numbers for online transactions with what they call ShopSafe®. With ShopSafe I can spin up a different card numbers with different limits and expiration dates for each online vendor on an ad-hoc or as needed basis. This allows me to approximate single use cards.

Third, they have a reasonably robust SMS alerting system that allows me to set up alerts for routine activity that may or may not be an indicator of irregular activity, such as ‘any charge over $50’ or ‘Transaction outside of US’.

They send me the SMS, I decide if it’s irregular. I like the idea of getting an SMS when someone logs into my account, changes my address, charges purchases online, orders checks, etc. Having some information ‘out of band’ can’t hurt. Unfortunately none of this really prevents anything, it just makes detection faster and easier.

The images list the various alerts that are configurable.

The only down side to getting an SMS every time you use your card is that some merchants don’t post transactions at the time of purchase. Occasionally I’ll buy something at noon and get woke up at 4am with an SMS from BofA telling me that I bought something 16 hours ago. Overall though, that’s better than any alternative that I know of, and in this case would have alerted us to the fraud much sooner.

For me, the more SMS’s the better.