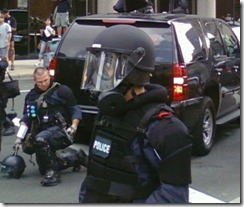 I certainly would not have thought of this failure mode. A law enforcement agency raids a datacenter and grabs the hardware that your provider uses to host your business critical application.

The FBI has seized all equipment belonging to our customers. Many customers went to the data center to try and retrieve their equipment, but were threatened with arrest.

Let’s assume that some customer in a cloud or co-lo is doing something bad. The law enforcement agency doesn’t understand clouds, virtualization VMotion, or hypervisors. They understand computers. Which one is it? Who knows. Grab them all.

I’m not clear on the details of what happened in this particular event. It’s possible that the provider was a legitimate target of law enforcement. From the point of view of someone who has a critical application tied up in the mess, the details are not as important as the concept. If someone, somewhere in the same co-lo or cloud as you commits some crime, what will law enforcement do, and how will you protect yourself against heavy ham handed agents and judges that don’t understand technology?

I’m thinking that we need to add a couple more questions to the cloud/co-lo RFP & vendor qualification forms:

Question #1 gets you fair warning of the impending raid, and #2 gets your servers back after the raid.

In the mean time, you presumably have recovered your operations at some other co-lo, in some other cloud.

"My understanding is that the way these things are hooked up is that they're interconnected to each other," he says. "Company A may be involved in some criminal activity and because of the interconnectivity of all these things, the information of what company A is doing may be sitting on company B or C or D's equipment."

We know that at least one FBI spokesperson doesn’t understand virtualization and cloud computing.

[FBI Special Agent Allyn] Lynd told the court that the owner of the co-location facility was being investigated for fraud and that even though Liquid Motors was not part of the investigation, its equipment might have been used to facilitate fraud by others

Hell – this clown doesn’t even under stand co-lo’s.