Presumed Hostile - Your Application is Out to Get You

Your applications are hostile, are you protecting yourself from them?

The assumption that your applications are insecure and that you need to protect yourself from them should be a factor in building your security model.

The intent of this post is not to break new ground, but rather to describe a concept in a simple framework that can be committed to memory and become part of the 'assumed knowledge' of an organization.

#2 - The closer a system or component is to the data (database), the higher the level of trust that must be assumed.

#3 - Any traffic or data that flows from low trust to high trust is presumed hostile. Any data flowing in that direction is assumed tainted. Any systems that are of higher trust assume that the lower trust systems are hostile. (a red arrow).

#4 - Traffic from high trust to low trust is presumed trusted. Any traffic flowing in that direction is presumed safe or trusted. (a green arrow). This one is arguable.

#5 - In between components that are of different trust levels are trust boundaries. Trust boundaries presumably are enforced by some form of access control, firewall or similar device or process. The boundaries are also assumed to be 'default deny', so that the only data or traffic that crosses the boundary is defined by and required for the application. All other data or traffic is blocked. The boundaries are also assumed to have audit logs of some kind that indicate all cases were the boundary was crossed. (a red line). 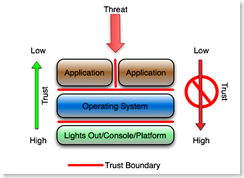 The application designer and administrators must assume that the outside world (the threat, sometimes called the customer or the Internet) is hostile and therefore they design, code, configure and monitor the application accordingly. This concept should be pretty obvious, but based on the large number of XSS and SQL injection attacks, it seems to be widely unknown or ignored.

Applications co-located on the same operating system must implicitly distrust each other (the vertical red line). Presumably they run as different userids, they do not have write privileges in the same file space, and they assume that any data that passes between them is somehow tainted and scrub it accordingly.

This of course is the basic operating system hardening concept or process that has evolved over the past decade and a half.

The platform (the hardware, the keyboard, the physical ports, the Lights Out console, serial console, system controller, etc.) assumes that the operating system that booted from the platform is hostile. The operating system, when assumed to be hostile, has to be prevented from access it's own console, its own lights out interfaces, or the interface that allows firmware, BIOS or boot parameters to be modified. This presumes that access to the console automatically invalidates any security on the operating system or any layer above the OS. This also encompasses physical security.

Adding virtualization doesn't change any of the concepts. It simply adds a layer that must be configured to protect itself against the presumed hostile virtual machines that it hosts (and of course the hostile applications on those virtual hosts). 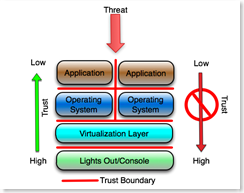 This has implications on how VM's get secured and managed. The operating system that is hosted by the virtualization layer should not, under any circumstances, have access to its own virtualization layer, or any management or other interface on that layer. Of course there are lots of articles, papers and blogs on how to make that happen, or on whether that can happen at all.

As in the first example, the platform must assume that the virtualization layer is hostile and must be configured to protect itself from that layer and all layers above it, and of course if the platform is compromised, everything above the platform is automatically presumed to be compromised.

For the Application Folks:

The third example conceptualizes the application layer only, specifically for those who work exclusively at the application layer. The red lines again are trust boundaries, and presumably are enforced by some form of access control, firewall or similar device or process. The concept is essentially the same as the prior examples. 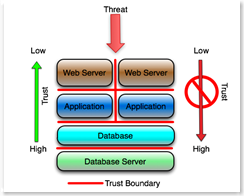 The web server administrator assumes that the Internet is hostile and designs,  configures and monitors the web server according. That's pretty much a given today.

The DBA assumes that the application running on the app servers is hostile and designs, configures, monitors and audits the database accordingly. This means that among other things, the accounts provisioned in the database for the application are minimally privileged (least bit, not database owner or DBA) and carefully monitored by the DBA, and that 'features' like the ability to execute operating system shells and access critical database information are severely restricted. This is fundamental to deterring SQL injection and similar application layer attacks.

The concept is really simple. Keep it in mind when you are at the whiteboard.

I can't be the only blogger in the universe who isn't mentioning the iPhone this weekend, so here goes. Apparently from what I read, accessing the platform (the hardware/firmware/console) pretty much invalidates all of the iPhone security at the operating system and application layer. That lines up pretty well with the concepts in this article.