I've spent a bit of time thinking about how to estimate the expected availability of simple systems. I'm interested not in detailed calculations of complex systems, but rather in rule of thumb type of estimates for simple systems. I suspect that this problem can be as hard or as easy as one would like to make it. I'm going to try to make it easy. Wish me luck.

I'll start out with the following assumptions:

(1) That you have a basic understanding of MTBF and MTTR.


(5) That you understand where you have coupled dependencies. Examples:
(6) That you have Tier 1 hardware from a major manufacturer with platform management software installed, configured and tested. You need the predictive failure messages that modern servers are capable of generating showing up on your SMS device. Predictive failure doesn't change the rate at which components fail, but it allows you you proactively schedule replacement of failed components during maintenance windows. This gives you 'freebie' failed component replacement. If you do not have Tier 1 hardware and do not have platform management software configured, your failure rate and your recovery time will will both increase.

(7) That staff are available during SLA hours, either officially working or available via some kind of on-call.

(8) That service contracts exist, they match the SLA's, and are routinely met by the vendors. In other words if you have a two hour part replacement contract, the vendor has to have depot spares less than one hour away and deliver them in less than two hours. Not all vendors do that. And if your SLA is 24 x 7 x 365, your support and maintenance contracts are also 24 x 7 x 365.

The estimates will:
When in doubt, I'll over-estimate the frequency and duration of outages. Better safe than unemployed.


The major components I'll cover are:
Excluded from the estimates are:
A handy chart


A chart of failure and MTTR assumptions might be handy. I'll express failure and recovery in hours per year. The math is pretty simple. Number of failure per year * hours to recover = hours failed per year. It can be converted to 'nines' later.


WAN links - T1's, DS3's, etc. For all non-redundant WAN links I figure an average of 4 hours per year WAN related network outage. Over hundreds of circuit-years of experience, figuring in backhoes, storms, tornadoes, circuit errors, etc, I figure that one outage every other year with an 8 hour MTTR is a reasonable estimate. Actual data from a couple hundred circuit-years of data is better that the estimate (one outage every 4 years with a 5 hour time to repair).

Routers, switches, firewalls and similar devices, booted from flash, no moving parts other than power supply fans I figure at one failure every 5 years, with the MTTR dependent on service contracts and sparing. If you have spare on hand, or you have good vendor service, your MTTR can be figured at 2 or 4 hours. If not, figure at lest 8 hours. If our network-like devices have disk drives or are based on PC components, I figure their failure rate to be the same as servers (see below).

SAN LUN's, properly implemented, I figure at one failure every 10 years. But SAN LUN or controller failure, even though it is rare, likely has a very long MTTR. Recovering from failed LUN's is non-trivial, so at least 8 hours MTTR must be figured, with the potential for more, up to 24 hours.

Power and cooling is highly variable. We have one data center where power/cooling issues historically have caused about 8 hours outage per year. We can't remember the last time we have a power issue in our other data center. I figure power/cooling issues on a per site basis, with estimates of 2 hours per year on the low end, and 8 hours per year on the high end.


Your assumptions for failure frequency and recovery time might be different than mine.

Stacking the estimates.
Once you have a rough estimate of the availability of the various components in an application stack, you can apply them to your application. 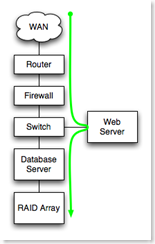 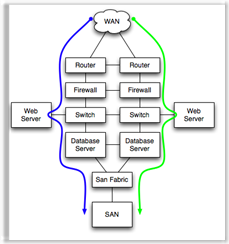 Parallel Dependencies improve recovery time. Components in parallel, properly configured for some form of automatic load balancing or failover, have an MTTR equal to the failover time for the pair of parallel components. Examples would be Microsoft Clustering Services, high availability firewall pairs, load balanced application servers, etc. In each of those cases, the high availability technology has a certain time window for detecting and disabling the failed component and starting the service on the non-failed parallel component.  Parallel component failover and recovery times typically range from a few seconds to a few minutes.


In the example to the left, if either the green or the blue path is available, the application will function. 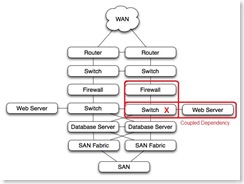 Coupled dependencies, as in the firewall-> switch -> web server stack shown, force the failure of dependent components when a single component fails. In this case, if the switch were to fail, the web sever would also fail, and the firewall, if active, would also see a failed interface and force a failover to the other firewall.