The Power Consumption of Home Electronics

I learned something last week. Xbox and PlayStation Game consoles are pathetically bad at energy consumption. The Wii doesn’t suck (power) quite as badly.

The Natural Resources Defense Council did an interesting study[1] of game consoles and attempted to estimate annual energy usage and cost. 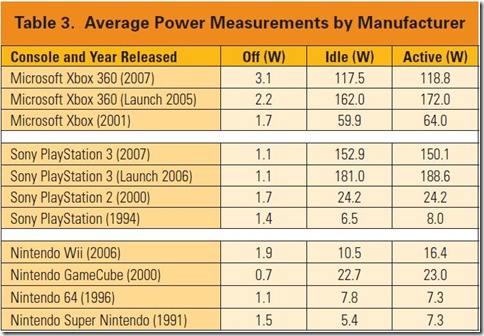 Ouch. Unlike half watt wall warts, a hundred and some odd watts might actually show up on your monthly electric bill. And from what NRDC can tell, the game consoles are not real good at powering themselves off when unused, which makes the problem worse.

This is really discouraging. The idea that energy consuming devices should automatically drop themselves down into a low-power state when idle isn’t new, yet we continue to build (and buy) devices with poor power management. I suspect that part of the problem is that there isn’t sufficient information available to consumers at the time of purchase to make a rational ‘green’ decision. Unlike refrigerators, clothes washers, and automobiles (here in the USA), energy consumption isn’t part of the marketing propaganda of most home electronics.

Someday smart retailers will figure out how to market energy costs on home electronics, much like they already do for large home appliances. For my last clothes washer/dryer (tumbler, to those on the wrong side of the pond) the sales dude tried to push me up to a higher cost model based on features. When I explained that for clothing related appliances, my feature requirements were a step above a rock in a river, he wisely and quickly pointed me to an expensive but efficient washer & dryer model.

As for the report as a whole, I’m skeptical of the annual gross energy costs and savings shown in the report, mostly because the estimates are highly dependent on user actions. I suspect that we really don’t know how many game consoles are left on continuously versus powered down after each use, and more importantly, the NRDC doesn’t consider the cost of cooling the heat generated by the consoles in those parts of the country where air conditioning normally is used.

So if you are like my neighbors and you leave your air conditioner running all summer, your summertime gaming costs will be much higher. The hundred plus watts of heat needs more than a hundred plus watts of cooling. But if like me, you live in a climate where heating is the norm for more than half the year, the waste heat generated by the console gets subtracted from the heat that your furnace needs to supply, making the cost of gaming somewhat less.

In any case, don’t sweat the wall warts. Look around for things that suck up a hundred or more watts and unplug those.