A Mime in a Box

Picking up on a thread by Andy the IT Guy, Which of these things is not like the other?

Trick question. They’re the same. The mime’s box is imaginary, as are the cross disciplinary restrictions that we place on developers, system and network administrators.

For example, I often see this diagram:

showing an application updating a database, when from a network point of view, what we really need to see is:

showing the application making a network connection to the database. But that subtle difference doesn’t mean much unless the person understands firewalls. They’ll need to understand them though, because I’m going to do this: 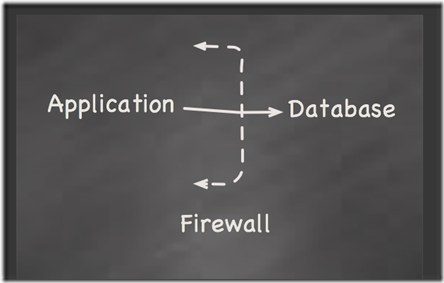 If they don’t understand the difference between TCP and UCP, between Inbound and Outbound and between Source and Destination, that firewall is probably going to break things.

Each technology specialist must understand enough about the adjoining technologies to design and build systems that make maximum use of the those technologies.

(If you’ve got a better way of phrasing that, let me know.)

I’ve got System Management Principle #6, and now, with Andy’s help, principle #5. Someday we’ll dream up the rest of them.
Photo by B. Tse, found here.