UPDATE: The Italian authorities have responded to the exposure of the corruption surrounding the construction of the stadium. The Minister of Stadiums has investigated the mismanagement and corruption, issued a report, and taken corrective action. The corrupt and incompetent officials have been identified, prosecuted and punished. Additionally, the authorities have agreed to resolve other outstanding issues that have prevented the completion of the project. 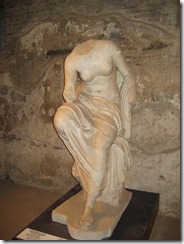 In an unusual turn of events, the authorities have issued severe consequences for the perpetrators of the scandal. Here you can see the  gruesome results of this most effective punishment. The statues of the wives of the corrupt officials have been decapitated (NSFW).

Shocking though it may be, this extreme punishment, reserved exclusively for the most severe offenses, has a long tradition in Italian culture. Over the millennia, many statues of spouses of famous officials have been similarly mutilated and placed for exhibition in great air conditioned halls. In many cases admission is charged for viewing the mutilated statues. 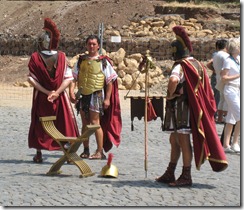 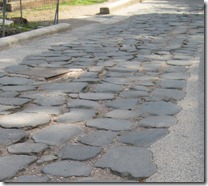 To supplement the guards, the Ministry has installed special road materials on all paths leading from the construction site. These roads are cleverly designed to impart a vibration of a specific destructive frequency and amplitude to any Chrysler Fiat that passes over the roads. The  Chrysler Fiats are not expected to traverse more than half way up the path before requiring the intervention of a mechanic, giving the authorities sufficient time to apprehend the thieves. 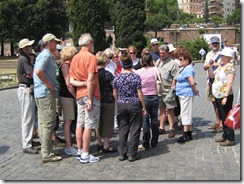 The security measures have been deemed sufficient to permit the resumption of construction on the stadium. New groups of highly skilled workers are restarting the project. These workers have been specially recruited from all parts of the world, arriving daily in great numbers by airplane, bus, car and train. As you can see in the photograph to the right, the Italian authorities have spared no expense in this area.

As shown in the photo below, the new workers have made great progress in the very short amount of time since the resumption of construction. 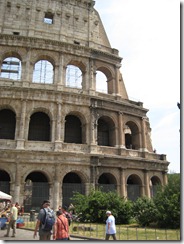 Scaffolding has already been erected and workers have restarted construction on the western facade.

Authorities have assured this reporter that the problems have been resolved and are optimistic that the new workers will make rapid progress on the stadium.

Enhancements to the Original Design

Additionally, according to stadium officials, significant improvements will be made to the original design. The changes are specifically designed to improve the usability and assure a steady revenue stream. Assurances have been given that the additions to the project scope will not increase the cost of the project nor delay its completion. 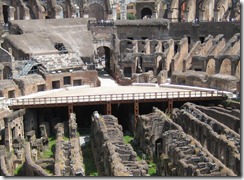 In the first enhancement, a new steel playing field is being built to replace the original wood and masonry field. The new field is a significant improvement to the original field and is expected to last as long as the construction project. The new playing field, shown here, is already partially constructed. Authorities claim the new field will result in less severe injuries and fewer weather related event cancellations. Additionally, the new playing field will permit the display of banner ads directly on the surface of the field. 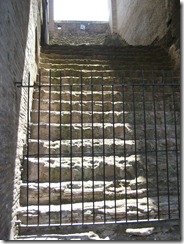 As with modern stadiums, special seating will be built for sponsors and executives.  A premium will be charged for the seating and the proceeds will be used to finance the completion of the stadium. The special seating is expected to generate significant revenue toward the completion of the stadium. Pictured here is the entrance to one of the reserved sections. Notice that the executives and sponsors will be separated from the ordinary visitors by modern, unobtrusive security systems. Studies have shown that separate seating for sponsors and executives will result in higher revenue for the normal seating sections, as the plebeian attendance will not be adversely affected by the antics of the upper classes. 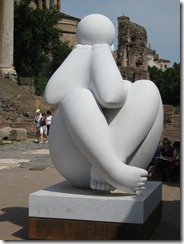 In the finest of classical Roman tradition, the perimeter of the stadium will be ringed with great works of art specially commissioned for this project. Authorities have commissioned a statue for each entry gate IV through XXIX.

One such work, shown here, represents a French interpretation of a Roman copy of a Greek original of the goddess Giunone, despondent over the transgressions of her consort Jupiter. The statue completed and is ready to be moved to it’s place near gate XXIV.

Other great works of art are ready for installation. 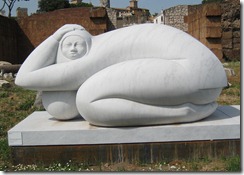 Here you see a French copy of a Roman interpretation of a Greek original of the same goddess Giunone, after Jupiter came home from work and discovered her in a compromising position with an unnamed consort. This statue is scheduled to be installed near gate XVIII.

To demonstrate the sincerity of the officials, the Ministry of Stadiums has permitted an exclusive inside tour of the factory that produces the great works of art. Below is a photograph of the nursery where the great statues are grown. Viewing from right to left, you can clearly see the maturation of the statues from larvae through pupae, nymph and bewilderment stages.

Completion of the Stadium

Unnamed officials of the Ministry of Stadiums have confirmed that the newly revised schedule for the completion of construction is uncharacteristically aggressive. The officials have assured this reporter that although they have specified 64 bit time_t structs for the project management software, the project will be completed before they are required. Project specifications listed Unix 2038 time compatibility as a requirement only because of EU regulations.

There has been much written about the demise of mainstream newspapers and the effect on the future of investigative reporting. By the example of this report, one should rest assured that the new media stand ready to expose and document the corruption, inefficiencies and transgressions of governments throughout the world.