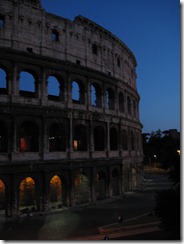 In the center of Rome are the remnants of large stadium. Tradition tells that the stadium was completed during the period of the Roman Empire and allowed to decay, unmaintained, during the centuries since construction.

This photograph, taken with a special filter and timed exactly as the planets Venus and Mars intersected a polyline bounded by the vertices of the tops of the arches and extending in to space, clearly shows that we have been mislead about the true origins of the facility. Careful analysis of the photo shows that the stadium is not a decaying ghost of a once great stadium, but rather it is a uncompleted, scandal ridden construction project gone bad.

By normal Italian standards, construction projects of this nature typically take decades. Corruption and mis-management are assumed, delays are inevitable.  But even by those standards, after nearly two millennia the stadium should have been completed. 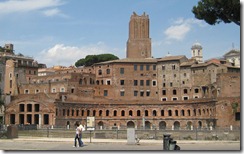 To give a comparative example, the construction on the shopping center in the photograph shown here was started at about the same time as the stadium, and as you can see, today it is nearly 90% complete.

How could it be, that after nearly two millennium of construction, the stadium is not yet complete? Through careful translation of long lost documents and inscriptions on pottery shards, the story of the stadium can finally be told.

The Emperor Flaviodius started building the stadium in 72 AD. Over time it became clear that the Emperor was not particularly adapted to managing large projects. Little did the emperor know that this would someday be the largest construction scandal in the western world.

Shortly after construction began, the ever generous Emperor Flaviodius made provisions for the entertainment of the construction workers. A large circus (Circus Maximus) was built near the site of the stadium. In the premier act of the circus, specially trained Christians performed great feats of daring with hungry lions. 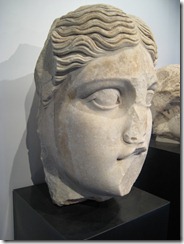 The entertainment was such that the workers spent much time in amusement and very little time working on the stadium. After a period of time, Flaviodius discontinued the entertainment, unfortunately without formal consultation with the workers bargaining units. The workers responded with a decades-long work slowdown, causing delays and cost overruns. Flaviodius eventually compensated the workers for the missing entertainment and work resumed.

Scandal again disrupted the schedule shortly after construction resumed. Emperor Flaviodius had to be removed from the project after a late night altercation with visiting Goths (Visigoths). The Emperor, shown above just after the altercation, suffered a broken nose and a bruised chin. 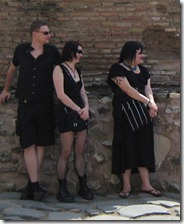 The visiting Goths appear to the right in an undated photo, apparently unaware that what seemed to be a minor incident has delayed the largest construction project in Rome. The presence of the Goths, who are culturally adverse to large structures, appears to have caused a work stoppage lasting several centuries.

As with many large projects, revisions to the plans were frequent and seemingly random. Ancient sources indicate that later project managers authorized changes to the shape, orientation, color and number of tiers of seating. The scope changes resulted in a series of project extensions, forcing significant re-work and lost time. Additionally, the project documentation requirements were such that handwritten documentation was impossible to maintain, thereby bringing the project to a standstill until the printing press could be invented. 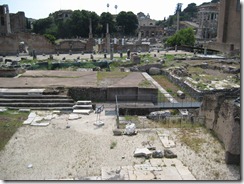 A major problem throughout the construction was the theft of building materials. When one walks through Rome today, one sees fragments of brick and marble originally purchased for the stadium randomly incorporated into the foundations of other, newer buildings. While theft is common in building projects, in this case it appears to have been on a grand scale. The building material theft caused the construction to stall for much of the period that we call the middle ages. The photograph above shows an example, even to day, of construction materials laying about completely unguarded.

Further delays  were apparently caused by a miscommunication between the powerful Italian construction worker unions and the authorities. Unnamed sources indicated that although the union declared a strike, the authorities failed to receive the notification due to the fact that the postal union was also on strike. Because the work on the construction had not noticeably slowed during the strike, it was several hundred years before the authorities noticed the walkout. Negotiations have yet to be restarted.

The investigation continued with calls and e-mails to unnamed officials. When presented with incontrovertible evidence of the scandal, few officials were willing acknowledge the corruption, mismanagement, tangente and incompetence, fearing that the resulting scandal would jeopardize their pension benefits.

Stay tuned for more information as the scandal of the stadium unfolds.

Update: The Italian authorities have investigated the scandal. Construction has resumed!