A year and a half ago I went on a wall wart power measuring exercise. I concluded that going around unplugging wall warts (8 lbs CO2/yr) wasn’t going to save the planet. If you want to save the planet, you’ll have to do hard things, like hang your clothes out on the line (.3 tons CO2/yr), drive your car half as much (3 tons CO2/yr), or turn off your geeky home server (.3 ton CO2/yr).

For me, saving energy is nothing new. We grew up getting yelled at for leaving the fridge door open, we set our thermostat back before set-back thermostats were fashionable, and in winter we left the water in the bath tub until it had cooled so the heat from the tub water would warm the house instead of the drain (I ain’t paying to heat the $#*&$^ drain!). My dad super-insulated our house before the 1973 oil crisis. We weren’t saving energy to be green though, we were just cheap.

So how about backing up my perception of myself as a cheap energy efficient citizen with some actual data? Hmmm… I just happen to have nearly thirty years of electric and gas bills. All I need to do is add them up and make some pretty charts.

I added a trend line to the Excel chart. I’m not sure what it means, but it looks cool, so I left it. Also - I didn’t have energy bills for half of 1996, so I’ve left that year out.

Electric energy use ranged from a high of 12,000kwh (1989) to a low of 3500kwh(2009). I’ll blame the ‘88-‘89 peak on air conditioning, electric hot water, and a household member who took really long hot showers with the air conditioning on. The dip in 1997 probably is a combination of a new house and no satellite receiver/computers/electronics running full time. I can’t think of what else might have caused low electric use around that time.

From 1998 to 2003 the increased load might be because I’ve had a server running 24/7 and I had a satellite receiver running most of the time (that thing was hot when it ran). In 2008 I turned off the receiver and in 2009 I switched the home server out for a lower power model. The 2008 decline might also be related to CFL’s, or it might be that we got used to being left in the dark. The difference between the years around 2003 and 2008-2009 is a couple thousand kilowatt-hours, or about a 200 watt continuous draw. That decline could easily be technology or light bulb related.

Electricity is only half of the home energy equation. We’ll need to consider heat too. 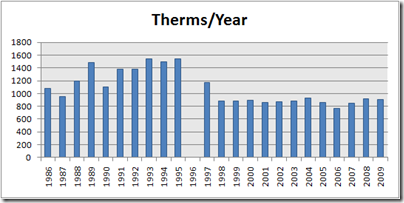 Natural gas use is mostly related to the weather, so therms per year alone doesn’t tell me much. I don’t know if I used more or less energy because of the weather or because of something I did or didn’t do. Fortunately there is a handy-dandy measurement called a ‘Heating Degree Day’ that is proportional to the daily average temperature. More HDD’s means colder weather. If I care about efficiency, then I need to compare coldness to energy use. Which brings us to… 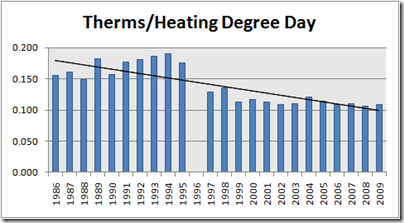 Once again, there is a hole at 1996, and I’ve faked in a trend line using Excel’s trend function. The discontinuity at 1996 shows how much less efficient the old house was compared to the new house. I’m not sure what the minor variations are from 1999 on, other than we may have adjusted the thermostat or left the windows open.

All this matters, of course, because I’m cheap green, so the next obvious thing to do is to translate this to CO2 equivalents. I didn’t put a trend line on this chart, ‘cause Excel grays out that menu item on stacked bar charts & I didn’t feel like figuring out how to calculate one manually. The CO2 values assume 1.2lbs CO2 per kwh and 12lbs CO2 per therm. Of course if your region has lots of nuclear power or is willing to dam the Colorado River and suck out all its potential energy, you’ll have different carbon/kwh ratios. (No big deal really. If you’ve already sucked all the water out of the Colorado, you might as well have the energy too, it’s not like Mexico has any use for it).

So I know how much carbon I’m releasing to energize my house. Now what?

Carbon offsets can be purchased at anywhere from $2.75 to $99 per ton. The Nature Conservancy sells offsets for $20/ton, but their offsets (tree planting) take up to 70 years to realize. I pollute today, I pay today, the pollution accumulates and warms the planet, and 70 years from now when the trees grow up my offsets get realized? Sounds like to little, to late. I can’t image falling for that scam plan.

Speaking of Heating Degree Days, the University of Minnesota happens to have records that go back a hundred-odd years, from 1891-present. 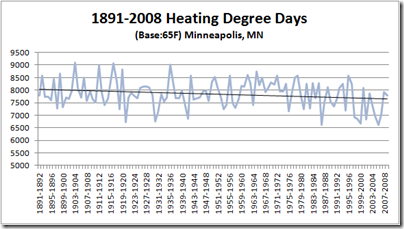 Because HDD’s are a measure of coldness, less HDD’s indicates warmer weather. To make it more dramatic I skewed the visual effect by shaving off the bottom of the chart. I suspect that climatologists would use something fancier than a linear trend line to indicate long term temperature change, but excel doesn’t have a hockey stick trend line, so linear will have to do.

And, because charts are cheap: 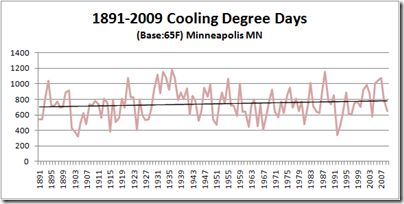 I’m pretty sure that households could make a significant impact on energy use by paying attention to home servers, gaming consoles, and other home technologies.
Posted on: January 05, 2010
Newer Post Older Post Home